Looking back to my last posting it would seem a significant tenure was in effect, but perhaps a better word may be invisible fascination period. 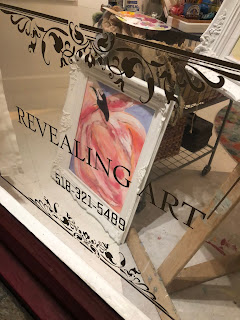 I physically moved again last May to Florida and in doing so stuck my head into the sand.  My move was rather implusive. I never took Florida too seriously as a state, rather it was to me it was a state of mind that retirees had envisioned, toppled with dredging of land.

My physical move dredged up in me more than I expected. Instead of feeling like a retiree , I was thrown into chaotic and depressive thoughts of " what now?"   "what is the purpose?" and much rewiring fizzled in my mind.

Having moved from years of suburban homes and lifestyle I garnered some spunk on this move to Florida  and downsized into a 1000 sq foot space.  There was no place to paint though ... and I was frustrated.   A perfect spot nearby opened up  and I rented it as a "studio" to paint.... and I was frustrated again.   How was I to " fool" others to be in such a space let alone have a pseudo artist tag upon my shoulders.  How would selling anything pay the rent?  How would anyone find me?  How would my desire to mess up my hands in paint help my messed up head? Everything was spinning and I was in this invisible period of fascination and frustration.

Depression laid its heavy gloves upon my shoulders.  Yes, now maybe I could be an artist.  The melancholy and depressed artist , that iconic persona that never sold a piece.  This person working fanactially ....Look at Van Gogh... But one person after another  said just
do it, just paint, just sit in your studio and cry or drink wine or pet the dog or whatever.   Just claim the space without " have to's". 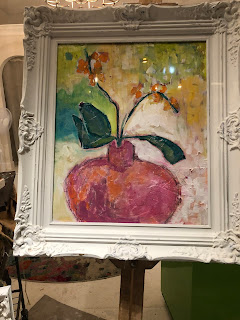 Now I go there to paint, to water plants, to adjust the lights, to pick up mail and bills.... I just go there.  It is so very fine.    Sometimes a dog and her owner linger near the water bowl outside, sometimes an elderly couple smile and nod as I mess the canvas with the bright pink I have taken on as my new neutral!   Sometimes I have even sold a piece or two.

I am back from my tenure of writing but teaching myself in another field.  Come visit me on my Facebook website of Revealing ART.  Yes, art has revealed much to me and taken me places I did not even want to go.. but art and thoughts can be rewritten, painted over until they fit the NOW moment.

Art this time in my life is pulling me into more and more of these Now moments and it feels good.

The studio is located on South Pineapple Street in Sarasota. Florida and I do have time to visit and be.  There is an extra easel too...swing by for a moment.


Posted by revivalredesign at 4:24 PM No comments:

revivalredesign
Interior redesigner, physical therapist , artist and lover of dance. Energized by creating for others